Handiedan’s accomplished and refined mixed media techniques allows her for an artistic journey through past, present and future. The result is an almost kaleidoscopical visual exploration whose discoveries are sometimes immediately visible and sometimes hidden in plain sight. 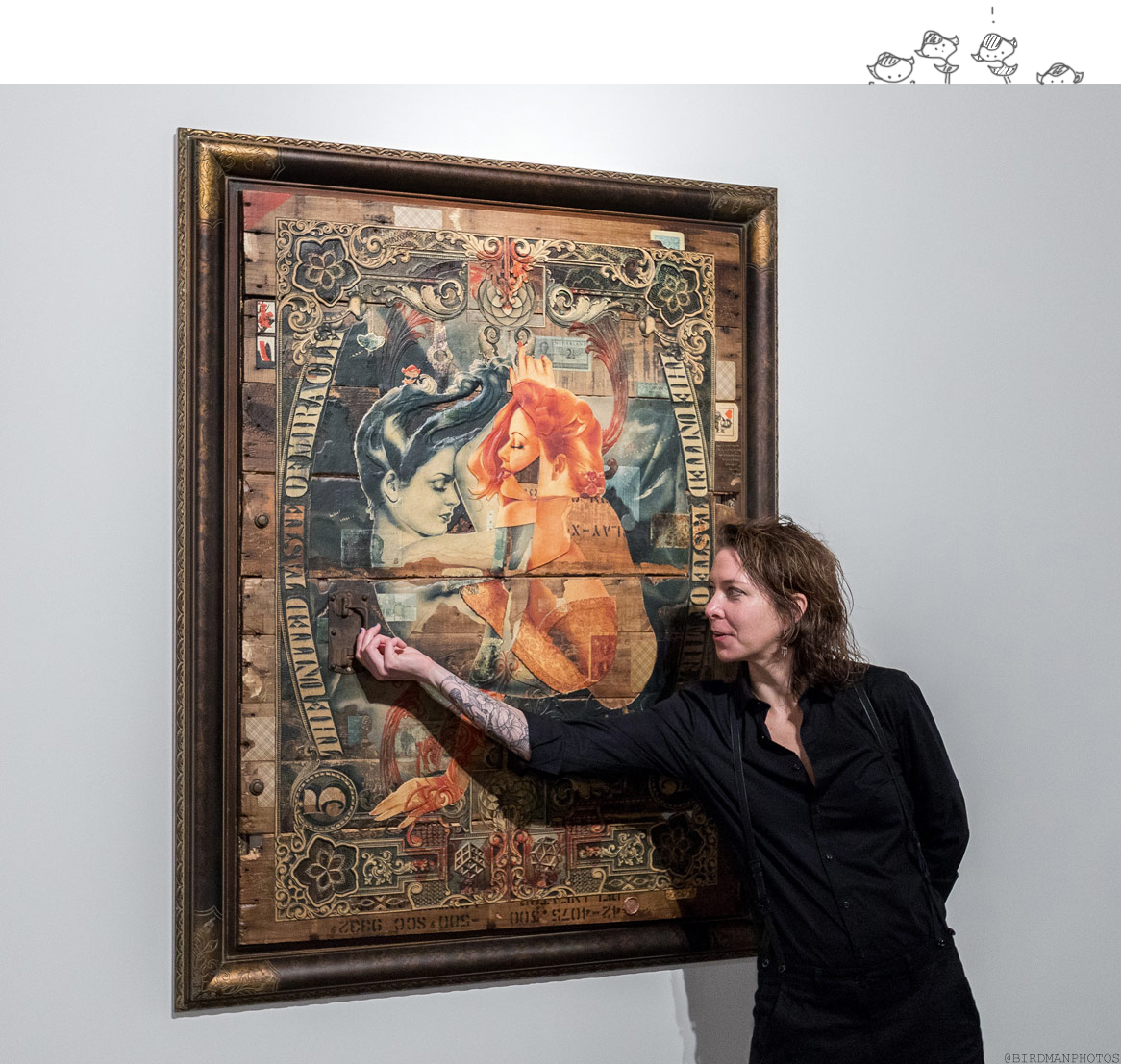 With a background in photographic design (graduated), illustration and graphic design (self taught) from 2002-2007, Handiedan started working as a mixed media artist in 2007.

Since 2011 Handiedan has taken her collage artwork outside the gallery creating large scale wheat paste collages in Europe and in the United States:
Kaaboo Del Mar, RMP, Richmond VA, 'Wall\Therapy', Rochester NY, 'One Wall' with Urban Nation, Berlin and 'White Walls' with Unit44, Newcastle upon Tyne.

Always curious and willing to experiment, Handiedan engaged in 2017 with Virtual Reality using Tilt Brush and she realized Handria, her first 3D VR virtual collage & drawing universe that was presented at Future Play Festival in Edinburgh, UK.
In 2019 Handiedan started to embed Augemented Reality to her work during her 2019 solo show Torus at Corey Helford Gallery in Los Angeles, and since early 2021 she explores the digital world of NFT art.

Deeply influenced by scientific and spiritual interests - from Quantum Physics, Cosmology and Numerology to Sacred Geometries, Metaphysics and Eastern Philosophies - her art embraces the various forms of vital energy endlessly permeating the universe and mirrors the eternal motion of life in its kaleidoscopic manifestations.

Protagonists of the works are the iconic pin-ups clearly inspired by the burlesque universe. The artist digitally composes their bodies by assembling anatomical parts of different pre-existing pin-up images from the 1920-1940s, transforming them into images reminiscent of the Neo-Classical and Victorian ages, the Parisian Belle Époque, up to the 1940's and Post-War sexy imagery.
With their joyfully sexual poses they celebrate the universal power of sensual love as one aspect of the energy of life. With luscious liveliness their forms bend in and out the background to personify Handiedan's investigation in femininity. They stand for the Lover and the Mother, embodying sexual freeing and tender love, strength and vulnerability.

At once mistresses and goddesses, these creatures are endowed with a symbolic power that can be traced down to the archetype of Mother Earth (or Mother Nature) shared by all ancient cultures. Nature perpetuates the circle of life as she nurtures the seeds that receives and gives them new life through stages of change, decay and renewal and according to her laws birth, life and death are just transitory moments of a constant vital flow of energy. 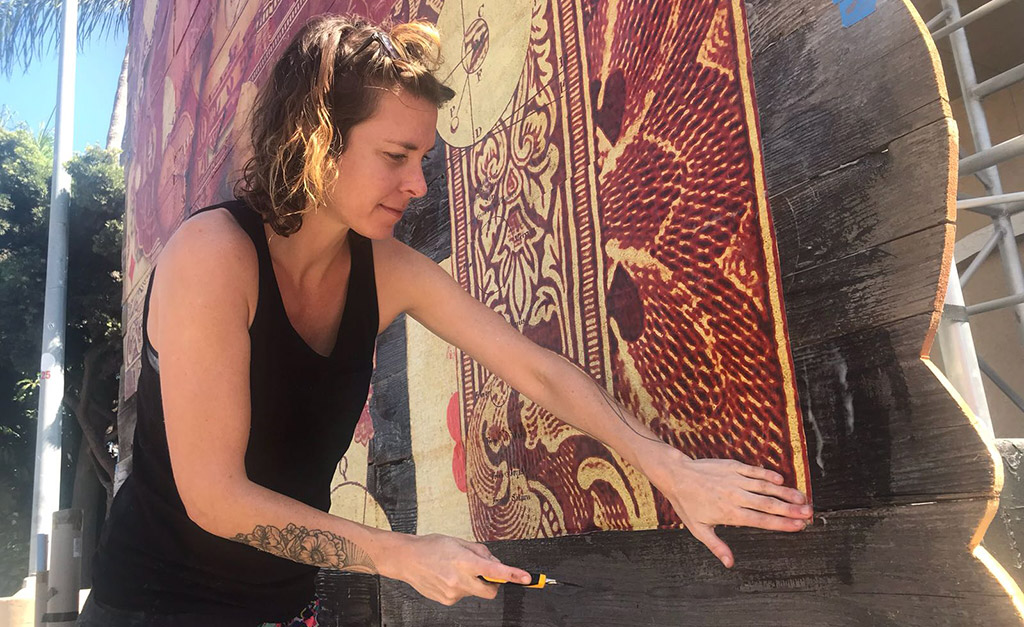 Handiedan is always inspired by the the Golden Ratio, also known as divine proportion, whose presence in all realms from quantum levels to the eternal motion of planets and galaxies is proof of a universal law connecting everything. The pin-ups inhabit a visual world filled with Fibonacci spirals, fractal patterns, planetary charts and the sacred geometric form of the Flower of Life. The bodies and their backdrops are connected through these lines and shapes that either scientifically or symbolically represent the universal harmony ruling nature and life.
The artist makes use of recurrent images that refer to this principle, like the skull commonly used in history of art as a strong visual reminder of the cycle of life and death. In many pieces the presence of a butterfly shape serves as living proof of the natural process of transformation and evolution into a magical even if short-lived creature of beauty.

The background also incorporates ornamental details like old currencies, stamps, music sheets, share certificates, science maps, playing cards and cigar bands, that Handiedan collected from her travels around the world. Each element is filled with hidden personal meanings connected with private events in the life of the artist, while the vintage aspect suggests the items’ hidden stories over time and space, adding to their decorative elegance an evocative power that works both on a personal level and from a cultural point of view.

The pen drawings and doodles 'tattooed' on the bodies and in the background stand for Handiedan's personal involvement in this energy flow. The cartoon-like character of Amėlie peeking out in each work is her alter ego: optimistic and innocent, odd, playful and always curious. Together with the little characters from old video games, her cute presence counter-balances with her simple cheerfulness the complexities of other symbolic references in the works.

Handiedan gathers all those visual fragments that trigger her own personal associations and digitally combines them on the computer following a fast-paced intuitive drive. Once the composition is ready, the creative process shifts into a more meditative slow-paced stage as she assembles the printed layers of paper with refined craftsmanship to form the hand-made piece. Each detail is printed on multiple sheets of paper that are hand cut with masterful precision and carefully pasted layer upon layer until it reaches a sculpted quality. During the assembling stage the found collage material is weaved through the layers and pasted over both the background surface and the three-dimensional parts with meticulous patience and care. As a result, each work carries an organic unity and the many visual motifs used by the artist harmonically coexist in a single yet richly complex experience.
Once the artworks are mounted into antique ornamented frames, they instantly strike for their exuberant liveliness while the countless and apparently hidden details scattered all over the composition ask for the gaze to slowly wander and linger around them.

Each work by Handiedan ideally travels through real and symbolic places distant in time and space. The collage technique naturally lends itself to the combination of diverse elements from different eras and faraway cultures, while the depth resulting from the overlapping layers gives material shape to the fourth dimension enabling to fully experience the interconnectedness and interdependence of everything.