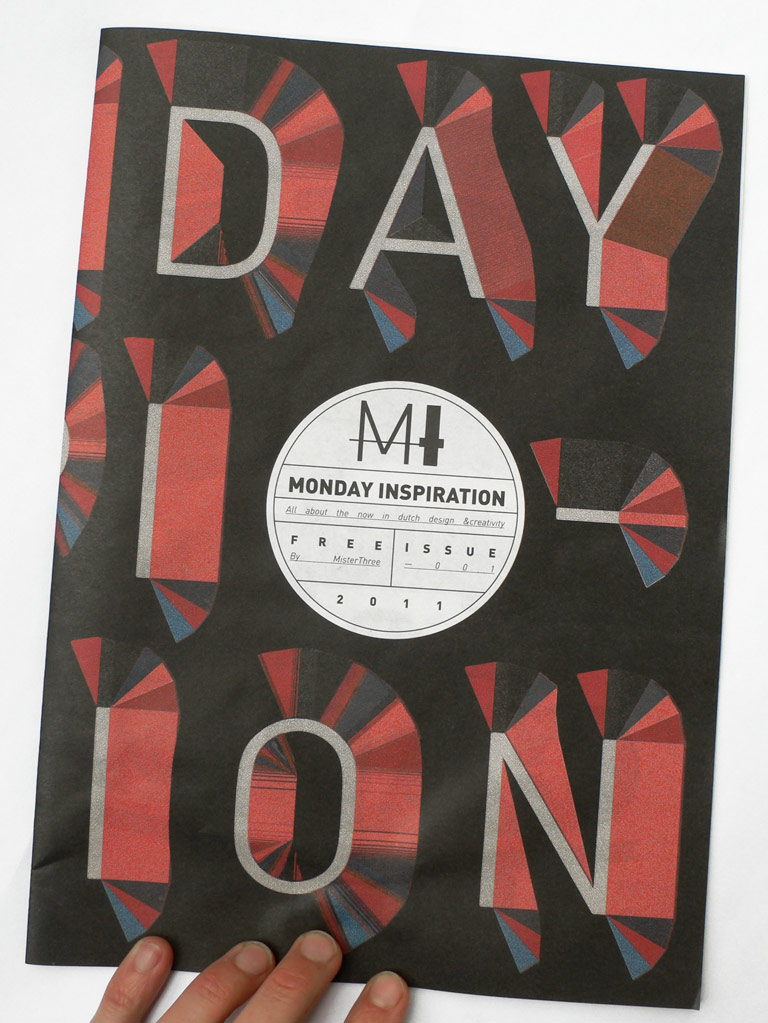 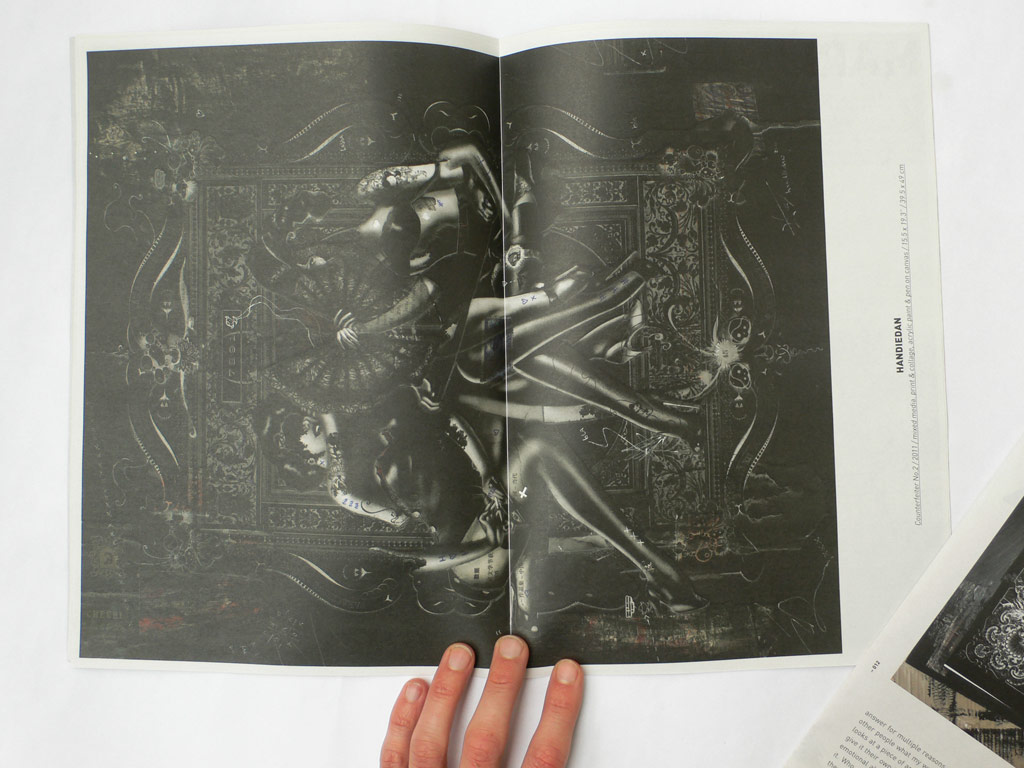 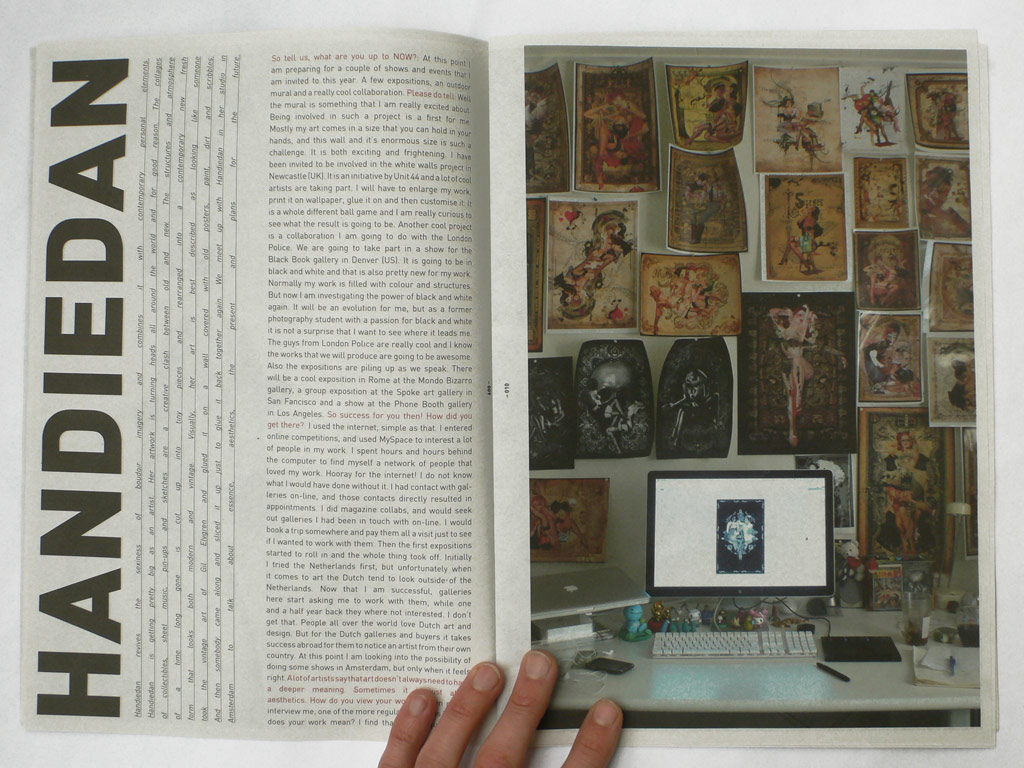 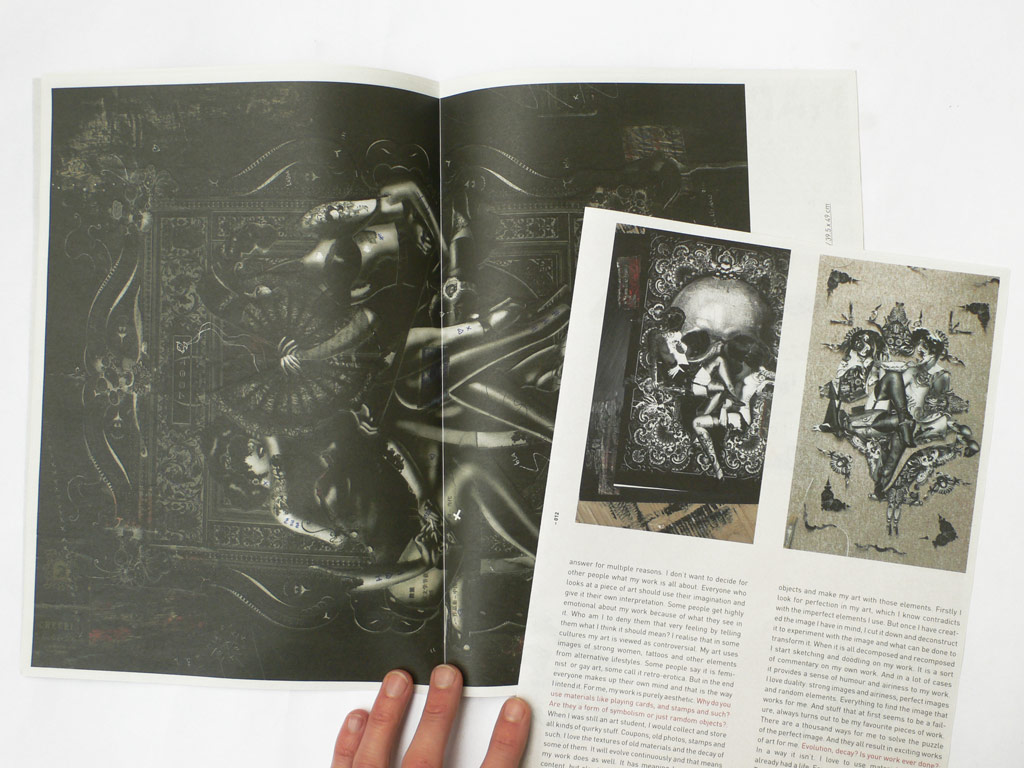 Handiedan revives the sexiness of boudoir imagery and combines it with contemporary personal elements.

Handiedan is getting pretty big as an artist. Her artwork is turning heads all around the world and for good reason. The collages of collectibles, sheet music, pin-ups and sketches are a creative clash between old and new. The structures and atmosphere of a time long gone is cut up into tiny pieces and rearranged into a contemporary new fresh
form that looks both modern and vintage. Visually, her art is best described as looking like someone took the vintage art of Gil Elvgren and glued it on a wall covered with old posters, paint, dirt and scribbles. And then somebody came along and sliced it up just to glue it back together again. We meet up with Handiedan in her studio in Amsterdam to talk about essence, aesthetics, the present and plans for the future.

So tell us, what are you up to now?

At this point I am preparing for a couple of shows and events that I am invited to this year.
A few expositions, an outdoor mural and a really cool collaboration.

Well the mural is something that I am really excited about. Being involved in such a project is a first for me. Mostly my art comes in a size that you can hold in your hands, and this wall and it’s enormous size is such a challenge. It is both exciting and frightening. I have been invited to be involved in the white walls project in Newcastle (UK). It is an initiative by Unit 44 and a lot of cool artists are taking part. I will have to enlarge my work, print it on wallpaper, glue it on and then customise it. It is a whole different ball game and I am really curious to see what the result is going to be.

Another cool project is a collaboration I am going to do with the London Police.
We are going to take part in a show for the Black Book gallery in Denver (US).
It is going to be in black and white and that is also pretty new for my work.
Normally my work is filled with colour and structures. But now I am investigating the power of black and white again. It will be an evolution for me, but as a former photography student with a passion for black and white it is not a surprise that I want to see where it leads me. The guys from London Police are really cool and I know the works that we will produce are going to be awesome.

Also the expositions are piling up as we speak. There will be a cool exposition in Rome at the Mondo Bizarro gallery, a group exposition at the Spoke art gallery in San Fancisco
and a show at the Phone Booth gallery in Los Angeles.


So success for you then! How did you get there?

I used the internet, simple as that. I entered online competitions, and used MySpace to interest a lot of people in my work. I spent hours and hours behind the computer to
find myself a network of people that loved my work. Hooray for the internet! I do not know what I would have done without it. I had contact with galleries on-line, and those contacts directly resulted in appointments. I did magazine collabs, and would seek out galleries I had been in touch with on-line. I would book a trip somewhere and pay them all a visit just to see if I wanted to work with them. Then the first expositions started to roll in and the whole thing took off.

Initially I tried the Netherlands first, but unfortunately when it comes to art the Dutch tend to look outside of the Netherlands. Now that I am successful, galleries here start asking me to work with them, while one and a half year back they where not interested.
I don’t get that. People all over the world love Dutch art and design. But for the Dutch galleries and buyers it takes success abroad for them to notice an artist from their own country. At this point I am looking into the possibility of doing some shows in Amsterdam, but only when it feels right.

A lot of artists say that art doesn’t always need to have a deeper meaning. Sometimes it is just about aesthetics. How do you view your work?

When people interview me, one of the more regular questions is: what does your work mean? I find that a hard question to answer for multiple reasons.
I don’t want to decide for other people what my work is all about. Everyone who looks at a piece of art should use their imagination and give it their own interpretation. Some people get highly emotional about my work because of what they see in it. Who am I to deny them that very feeling by telling them what I think it should mean?

I realise that in some cultures my art is viewed as controversial. My art uses images of strong women, tattoos and other elements from alternative lifestyles. Some people say it is feminist or gay art, some call it retro-erotica. But in the end everyone makes up their own mind and that is the way I intend it. For me, my work is purely aesthetic.

Why do you use materials like playing cards, and stamps and such? Are they a form of symbolism or just ramdom objects?

When I was still an art student, I would collect and store all kinds of quirky stuff.
Coupons, old photos, stamps and such. I love the textures of old materials and the decay of some of them. It will evolve continuously and that means my work does as well.
It has meaning because of the content, but also because of what they can do to transform an image. I greatly enlarge my images because that way I can use the imperfections like .jpg dithering as an extra texture. I use whatever I run into, which makes my work personal. It will show you what I have been up to and places I have been.

I digitally scan all these objects and make my art with those elements. Firstly I look for perfection in my art, which I know contradicts with the imperfect elements I use.
But once I have created the image I have in mind, I cut it down and deconstruct it to experiment with the image and what can be done to transform it. When it is all decomposed and recomposed I start sketching and doodling on my work. It is a sort of commentary on my own work. And in a lot of cases it provides a sense of humour and airiness to my work. I love duality: strong images and airiness, perfect images and random elements. Everything to find the image that works for me. And stuff that at first seems to be a failure, always turns out to be my favourite pieces of work. There are a thousand ways for me to solve the puzzle of the perfect image. And they all result in exciting works of art for me.

Evolution, decay? Is your work ever done?

In a way it isn’t. I love to use materials that have already had a life. For me it is an endless source of input. To use something that has already started to deteriorate is exciting. Because using it will allow your work to slowly turn into something else.
Cards will fade, Money will wither, and ink will change colour. My work will start leading its own life once I’ve finished it. And I love that.